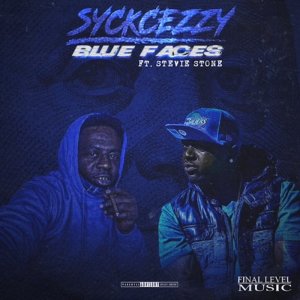 Ice-T and Henry "Hen Gee" Garcia's label, Final Level Music has emerged another hardcore artist and his name is SyckCezzy. SyckCezzy's single "Blue Faces" features Stevie Stone, a childhood friend from the neighborhood. The single appeals to those who can relate to the day-to-day hustle and addresses the haters and naysayers. Syck and Stevie's approach in this gangsta track considers multiple devious approaches that will increase their net worth at the expense of the well-connected streets. The single is available on all digital music platforms including Spotify and Apple Music. "I'm a "reality" rapper that's what I consider myself ... You can’t fit me in a certain type of box!" Be sure to connect with SyckCezzy on all social media and digital music platforms.

YO FAMILY, THIS IS A BIG BANGA, AND I WILL BE SPIN THIS TRACK ON TWO STATION, RIPPEDRADIONETWORK.COM OVER IN DC WASHINGTON & RASCAST.CO.UK OVER IN THE UK WE WILL ALSO TAG YOU ON IG POST WHEN THE SHOW IS UP, SO YOU CAN PUSH THE SAME POST ETC SO YOU CAN GET YA FRIENDS, FAMILY, AND FANS TO LOCK IN. ALL WE NEED IN RETURN IS COUPLE OF JINGLES. WE WILL DO THE SAME BACK FOR YOU AS WELL.. THIS IS WHAT WE NEED FIRST JINGLE 1) YOUR NAME 2) YOUR LOCATION 3) BIGGING UP JSHARKZ SECONDJINGLE 1) YOUR NAME 2) YOUR LOCATION 3) BIGGING UP RASCASTRADIO, RIPPEDRADIONETWORK, UDL Radio, W3stBar & Modelzentz LAST JINGLE 1) YOUR NAME 2) YOUR LOCATION 3) BIGGING UP DJREDZ, Martin Briggs, DJ Silencer, MR47 & Lava Love WE WILL HAVE YA DROPS OVER TO YA WITHIN 72 HOURS. BIG THANK YOU FOR YA MUSIC AND YA TIME NUFF LOVE JSHARKZ